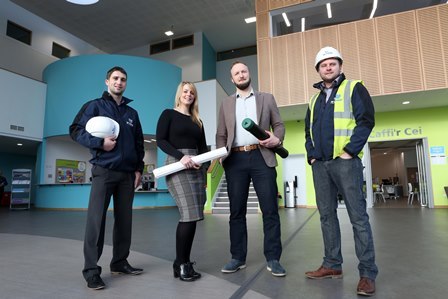 Two former classmates who studied design and technology together at a North Wales high school are now part of a team helping to design and construct new schools in the region.

Rachael Fenton, a project landscape architect and Peter Fisk, an architect, who both attended Eirias High School in Colwyn Bay, are now working on major projects being run by Wynne Construction.

None of the four had had contact with each other after leaving school, so were surprised to learn they had shared the same teachers and school.

Chris Wynne, managing director of Bodelwyddyan-based Wynne Construction, said: "I don't know what it is about Eirias High School that produces so many former pupils who are carving careers in design and construction.

"It's great news for us as they play a valuable part in the expert teams working on our extensive portfolio of school construction projects."

Wynne Construction has won several multi million pound education contracts this year, having built up a wealth of experience in schools and colleges of further and higher education through North Wales and the North West.

Rachael Fenton, 29, who is employed by Ryder Landscape Consultants, has been involved in several design and build projects on behalf of Wynne Construction, with her former classmates.

These include the development a new shared site at Glasdir in Ruthin for Ysgol Pen Barras and Rhos Street Primary schools and the new Gwenfro Primary School in Wrexham.

Rachael said: "We had a great design and technology teacher at Eirias and he actually suggested landscape architecture to me as a career. I shared some lessons with Peter Fisk in the sixth form though he was in the year above me.

"I'm really pleased that we are working together to deliver exciting and inspiring external spaces for the next generation in North Wales. It's a real opportunity to give something back to the areas we grew up in and new school developments are fantastic projects to be involved in."

Ben, who graduated from Northumbria University in 2011 and previously worked for JN Bentley Ltd and house builder Watkin Jones said: "I joined Wynne Construction in July and am really enjoying working on the various schools projects that are taking place in North Wales at the moment.

"It's a coincidence that key members of the team all went to the same school."

Wynne Construction site manager Mark Wilson, 29, was in the same year as Rachael at Eirias, though he left school at 16 to pursue an apprenticeship in joinery.

He joined Wynne Construction 13 years ago and, after several promotions to site manager, he is now in charge of the Gwenfro Primary School project, working alongside Rachael Fenton.

"I remember Rachael from school," he said. It is good to be working with her on the Gwenfro project as we overcome the challenges of building a new school next to the existing school that is still in use," he said.

Architect Peter Fisk, 30, studied for his undergraduate degree at Manchester School of Architecture and post-graduate degree at Liverpool John Moores Art and Design Academy. Now working as project architect at Lovelock Mitchell Architects in Chester, he said: "I remember being in the same class as Rachael for design and technology and we had a great teacher called Mr Johnson who was very inspiring.

"I am enjoying the opportunity to design and deliver a series of new schools across North Wales in Holyhead, Bangor, Ruthin and Connah’s Quay."