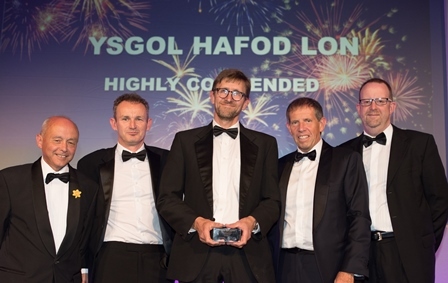 Bodelwyddan-based Wynne Construction reached the shortlist for an award for best Welsh small-to-medium-sized construction firm. The company beat off strong competition to become one of four firms shortlisted in the category in the 2017 Constructing Excellence in Wales (CEW) awards.

In addition, the Ysgol Hafod Lon project built for Gwynedd Council gained a Highly Commended Award for "Sustainability". The £13m new school for pupils with special educational needs is based in Penrhyndeudraeth.

The awards are recognised across the Welsh built environment as the biggest and brightest celebration of best practice in Wales. Wynne Construction was shortlisted alongside three other companies.

Judges acknowledged the company's success in becoming one of two regional companies selected as a Tier 1 contractor for the £200m North Wales Construction Framework, competing for opportunities alongside four other national UK firms. Furthermore, once on the framework. Wynne Construction has secured a number of the projects procured, resulting in orders of more than £80m.

Founded in 1926, Wynne Construction prides itself in supporting and developing its trusted supply chain, which includes companies and suppliers sourced as locally to a project as possible. The company recently appointed a community development manager, to liaise with the local community and to work with other supporting agencies such as the Jobcentre Plus and The Prince's Trust, to offer work placements for the long-term unemployed. It also runs workshop programmes for pupils to learn about the design and construction of the new school building they will use.

Wynne Construction's recently completed projects in N Wales include a sixth form centre for Coleg Cambria in Deeside; Ysgol Hafod Lon Newydd in Penrhyndeudraeth, Gwenfro Primary school in Wrexham and Ysgol Cybi in Holyhead. It is currently working to refurbish the People's Market in Wrexham, as well as new schools in Ruthin, Bala, Bangor and Anglesey.

CEW judges also acknowledged the firm's early investment in technology and training, to become one of the leading SME firms in use of the Building Information Modeling (BIM) system, and the first indigenous Welsh-based SME to achieve the BIM Level 2 accreditation through the BRE.

Wynne Construction managing director, Chris Wynne, said:"This shortlisting reflects the commitment of our staff, and the local suppliers we use, to delivering the best job possible every time. We wouldn't have achieved it without their hard work, and I thank every one of them for their contribution."