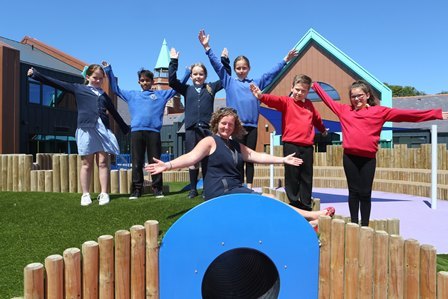 Pupils from three Holyhead schools are enjoying first class educational facilities as they start the new term. For the town's much-awaited £9m Ysgol Cybi Primary 'super-school' has opened its doors for business.

A total of 540 pupils plus 70 nursery pupils from the former Ysgol Llaingoch, Ysgol y Parc and Ysgol Parchedig Thomas Elis are benefiting from the latest facilities and resources. They include modern and well-equipped classrooms and suitable outdoor areas for play and learning.

The flagship project comprises a new two-storey development and the refurbishment of an existing Grade II listed building that housed the former Old Cybi school.

It was designed and built by Wynne Construction, which used cutting edge technology to reduce waste and save time during the construction. They applied Building Information Modelling (BIM) technologies and processes to create a 3D virtual model of the building. Using the 3D model, engineers identified, before construction started, a 75mm misalignment in a wall within the existing listed building. It meant they could amend the design of the steel frame before it was built and installed.

Wynne Construction has also worked with Anglesey Council and their North Wales-based supply chain partners, to gather data within the BIM software information such as design specification and materials, that will help keep on-going maintenance costs down.

Parents, pupils, teachers and ancillary staff enjoyed tours of the new building at an open day recently. Managing director, Chris Wynne, said: "The partnership between our technical team and the in-house team at Anglesey Council has worked really well. We're pleased and proud to have delivered such a fantastic new learning environment for so many children."

Anglesey Council spokesman Gareth Thomas said: "The New Ysgol Cybi Primary School Project has been the first BIM project for the authority. We've delivered an excellent collaborative working and project delivery solution on the first of many 21st Century Schools projects. It's rewarding to see that pupils, parents and teachers alike are so delighted with their new building and resources."