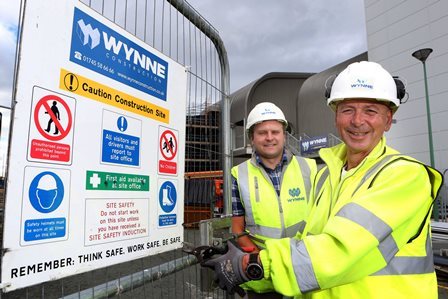 A man who struggled for six years to find work, following convalescence after being stabbed three times while working as a security guard, has finally found his perfect job.

Brian Edwards, 52, of Rhyl, was offered an employment contract with Wynne Construction, who spotted his potential during a work experience placement organised by the town's JobCentre.

Now Brian, who had worked as a plant operator for a civil engineering firm prior to switching roles to security work, is now in a full-time post as a construction operative, helping to refurbish Rhyl Pavilion. He said: "I live across the road from the Pavilion. I used to walk into town and look at it and think I would like to work on it.

"When Wynne Construction's name came up at the JobCentre, I asked if I could apply for a work experience placement there. The placements are voluntary and you are required to spend two weeks on them. I asked to stay on longer at the site. Other guys said I was an idiot for working voluntarily. I disagreed and I'm the one with the job now."

Wynne Construction site manager Mark Wilson said: "I saw Brian had potential. He is a good lad and keen to learn. Brian proved himself keen to work and carry out the job to the best of his ability. He asked questions if he wasn't sure. He was relatively new to construction sites, but had a good attitude to health and safety. It was clear that his work experience had been beneficial to Brian, and we valued his input into the on-going project so much that we offered him a contract to see the project through."

Wynne Construction's refurbishment of the Pavilion has included major structural alterations such as replacing the curved roof and installed feature lighting to modernise the front entrance and overall appearance.

The company works with JobCentres close to its respective sites to offer work placements and give talks and mock interviews to candidates on the Work Experience programme.

Brian said: "Wynne Construction gave a talk last August on how to obtain CSCS cards to work on a construction site. I had a CSCS card but went along anyway. I liked the sound of Wynne Construction. Another time, Wynne's business and community development manager, Alison Hourihane, carried out mock interviews to give unemployed people practice. Soon after that, the Wynne sign went up on the Pavilion site, and I asked at the JobCentre for a placement there."

Wendy Harrison from Rhyl JobCentre said: "We are delighted that we helped to facilitate this opportunity for Brian. Brian has worked closely for many months with Jean from the Communities For Work Project to help him advance into work. Brian's dedication shone through and the results speak for themselves!"

His role includes general labouring as well as looking after site welfare. Brian added: "They let me do some things on my own. I did the concreting for the footings to get it to a certain level on my own. I can't fault this job. Mark Wilson is the best manager you could ask for."

Brian was working as a site security guard at a retail location in Liverpool in 2009 when he was attacked. He explained: "It was 3am and I was with another security guard when we were attacked by two men. I was stabbed three times, twice in the lower back and once in my shoulder. I had to have surgery on the shoulder. I recovered but I left security after that."