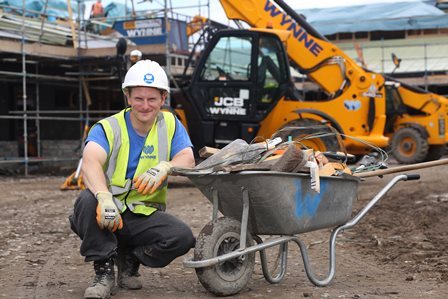 A voluntary work experience placement has led to the first-ever permanent job, at the Glasdir School site, Ruthin, for a Rhyl man unemployed for nearly a year.

Alistair Paul, 34, previously earned a living as a temporary worker placed by employment agencies, in factories or as a labourer.

Now, after impressing bosses during the two-week placement at the site of the £11.2m shared school site, he has been offered his first direct employment contract, by Wynne Construction, with help from Rhyl JobCentre.

Alistair said: "It's much better than agency work. I'm learning things every day, such as how to mix cement and how to stack piles of wood. I have responsibility to keep the site safe and clean. I also like working outside."

Rob Howarth, his work coach at Rhyl JobCentre, notified Alistair about the voluntary placement. In conjunction with Communities First, Rob helped Alistair apply for a CSCS card, required to work on construction sites.

Wynne Construction site manager Andy Lea said: "I interviewed a few candidates. Alistair was the strongest and I offered him the two-week placement. He proved to me he was just what I was looking for. He was keen to get on with the job. Alistair hasn't had a lucky break. He's been on temporary contracts doing two weeks here or two months there. He has shown he is committed as he gets the bus from Rhyl each day. We've offered him a contract til March 2018. Alistair is talking about driving lessons. If he can drive to work, there is no reason who we wouldn’t offer him work on other sites further away."

Rob Howarth said: "Alistair was a pleasure to work with. He identified quickly what his barriers were and we worked together to remove these. It is to Alistair's credit that he took up the opportunity of unpaid work experience to show an employer his skills. Well done Alistair - well deserved."

Work started at the Glasdir site in January. The timber frame has been constructed and doors and windows are now being fitted. The current site total of 55 workers is expected to grow to 70-80 during the autumn.

The Glasdir scheme is funded by Denbighshire County Council and the Welsh Government, under the 21st Century Schools programme. The new Ysgol Pen Barras and Rhos Street School are due to open in Spring 2018.