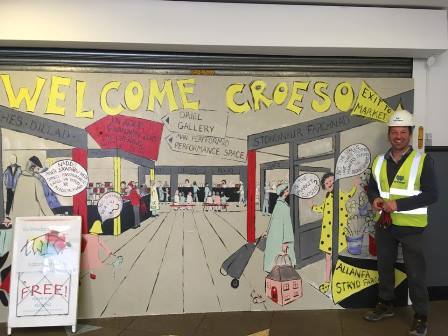 A public vote has chosen the name for the £4.5m arts centre in Wrexham being developed by Wynne Construction. A total of 897 people voted between three possible names for the £4.5m market and arts development. They chose Tŷ Pawb /Everybody's House as the name.

Wynne Construction started work on the site in January this year to transform the former Peoples Market into a modern-day community and retail facility.

The refurbishment, which involves adding two galleries, performance areas, a gallery shop and market stalls, will bring together arts and cultural exhibitions with the town's traditional markets.

In the early stages, Wynne Construction took part in an open day, to connect with as many local businesses and self-employed traders as possible interested in working on the refurbishment.

Chris Wynne, managing director of Wynne Construction, said: "As an established contractor in North Wales, we were really pleased to have been contracted to re-develop such an iconic regional attraction. Work is progressing well and we've had lots of interest from the local community in our progress. I'm sure Tŷ Pawb will become a very popular venue."

"We've made sure to use local suppliers where we can, so that as much of the investment as possible is spent within the regional economy. We've also involved the local community and key stakeholders in delivering a range of community benefits in support of the investment into the project."

To celebrate the opening of Tŷ Pawb, due to take place in April 2018, a Wrexham Bank Holiday tradition will be resurrected. Dydd Llawn Pawb/Everybody's Monday, had previously been popular in the late 1800s. Following the town's annual Spring market, workers would be given the Monday off, and the town adopted a carnival atmosphere, with street entertainment, food stalls, musical acts and surreal side shows.

The Tŷ Pawb project is being funded by the Welsh Government, Arts Council of Wales and Wrexham County Borough Council.