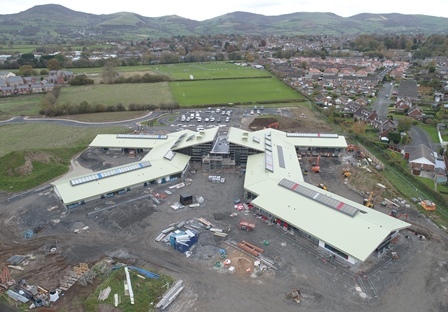 Flood prevention measures installed by Wynne Construction at a school site have additionally reduced the risk to nearby housing from a one in a hundred year risk, to better than one in a thousand years.

Wynne’s work raised the level of the new school by between one and two metres and introduced measures so that in the worst-case scenario, the water would run off onto the nearby playing fields and to areas on the site before gradually dispersing naturally.

The work has been carried out at the £11m Glasdir School site in Ruthin, which is in an area prone to flooding in the past 15 years. The recently-built housing estate now better safeguarded thanks to the measures is also called Glasdir.

Residents from 100 of its properties had to move out in November 2012 after a blocked culvert on a flood relief stream sent water surging onto the estate.

Specialist engineer Waterco used hydraulic modelling to predict flood risks and to alleviate them. Its civil engineer, Chris Lewis, said: "We were asked to address this from the point of view of the new school but the recommendations which Wynne have followed mean that we have also reduced the risk to the homes on Glasdir."

Wynne Construction managing director, Chris Wynne, said: "As a local firm, we had been well aware of the wider threat from flooding at Glasdir. We're pleased that the work at the school is also going to protect nearby homes."

The new site will replace the existing buildings of Rhos Street School and Ysgol Pen Barras in the town and is due to open in September 2018. Work is now taking place on the mechanical and electrical installation, internal plastering and external render.

Currently, 71 per cent of the project spend by Wynne Construction has been with companies within 30 miles of the Ruthin site, and 75 per cent of the workforce live in North Wales, creating sustainability and safeguarding local jobs. To date, eight apprentices in various trades have been employed on the project and a number of new jobs created, taking young people out of unemployment.

The scheme is being delivered under the 21st century schools programme with funding from Denbighshire County Council and Welsh Government.