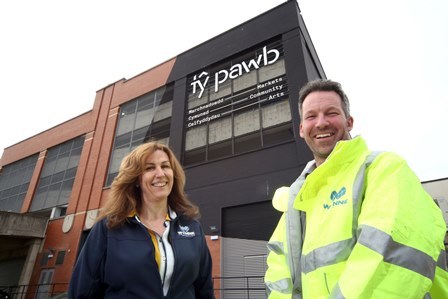 Wynne Construction is celebrating the achievement of impressive local employment and spending outcomes during its work to redevelop the £4.5m Tŷ Pawb /Everybody's House arts and retail facility in Wrexham.

In figures released, Wynne Construction has revealed it achieved a 77 per cent project spend with Welsh-based SMEs; a total of 38 per cent of the workforce lived within 30 miles of the site; and no fewer than 12 apprentices worked on the project in various trades.

We also offered work placements with The Prince's Trust and students from Coleg Cambria.

Wynne Construction has a policy of where possible using local suppliers and workers, as well as employing apprentices and offering work placements to people from the locality of every project it builds.

The innovative redevelopment of the former Peoples Market has brought arts and cultural exhibitions together with the town's traditional markets in a modern community and retail facility.

As part of the refurbishment, Wynne Construction developed two national-standard galleries for display of exhibitions, performance areas and a gallery shop, together with 20 market stalls and a food court. Other features include a Shepherd's hut workshop, new furniture and seating.

The company also engaged with residents, Wrexham councillors, children from local schools and other stakeholders. They supported educational tours of the construction site, which included careers' talks about the trades skills required on such a redevelopment, available to eight local schools.

Schools that took part were St Mary's RC and Hafod Y Wern primaries, as well as Ysgol Y Grango secondary school. Chris Wynne, managing director of Wynne Construction, said: "The pupils were fascinated to hear how the design team went about designing a contemporary, bright and airy facility from an old hall market and car park. They took part in workshops, and later returned to explore the finished product. They seemed really impressed at the transformation. As a company, Wynne Construction always aims to support the local community and economy."

Jo Marsh, creative director at Tŷ Pawb, said: "Tŷ Pawb is designed to be a flexible space in which we can engage the public in a variety of ways. Our aim is to make this a place which has local roots as well as national and international appeal, and for it to be as much a part of daily life for people living in Wrexham as it is a destination for people living further afield."

The first cultural event to be held at the new facility was "Is This Planet Earth?" an exhibition of the work of ten artists exploring how environmental and ecological changes might shape the planet in future. The project was funded by the Welsh Government, Arts Council of Wales and Wrexham County Borough Council.