Drones have become an integral part of our projects 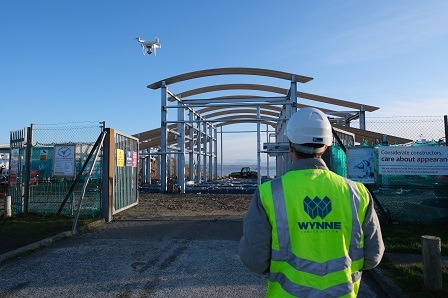 Since being awarded a licence in December 2017, Wynne Construction has operated a drone on site of its major projects, and according to designated operator and design coordinator Richard Wynne, it will help the business reach new heights.

He said: “We have been exploring advancing technology because providing drone shots means you can minimise the risks of working at height and lower project costs. Hopefully that sets us apart from our competitors and helps towards decreasing costs and allow clients to take satisfaction from seeing the images from the drones.”

Richard undertook an intense course over five days in Devon involving examinations, legislative work and a practical flight test to become an accredited operator. Wynne Construction has since renewed its licence for 2020 and is one of a number of companies to have signed up for the new registration scheme launched by the Civil Aviation Authority (CAA). Richard added that the company is aiming to go even further with technology moving forward and speeding up the processes in place.

He said: “We’re exploring an app that automatically takes pictures when the drone flies within a defined area of the project. When it lands you can then build a mesh model from the images which can be modelled and imported into a new build 3D model.
This will allow us to shape existing buildings which can then be used on schemes with extensions and new build elements, quickening things up by around 75 per cent as there is no need for scaffolding and labour."

The design coordinator said how the capability of drone technology has meant it has become a vital part of the project that they undertake for clients and has helped develop stronger relationships.

Richard said: “It’s part of every project, from start to finish. We used a drone in Deeside where we were able to carry out a full roof and gutter survey. Without the drone, they would have had to get someone out to do it, and provide them with access equipment, so again it’s helped to reduce risk and save money. For another project during the construction of the new Ysgol Penyffordd site in Flintshire, we liaised closely with Airbus. Owing to the proximity of the location to Airbus’ Broughton airport, we were in constant communication with the aerospace giant over any scheduled drone flights.”