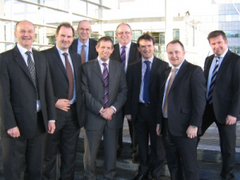 The public sector must allow fair play for construction companies of all sizes, argues the Welsh Conservatives. In a meeting on the 10th March, arranged by Clwyd West AM Darren Millar, six company bosses from North Wales voiced their concerns to Deputy First Minister Ieuan Wyn Jones.

The construction chiefs detailed to the Minister exactly how the recession's affecting the construction industry - reporting that between them, they've already laid off between 15-25% of their staff.

They also warned more jobs could be lost unless swift action is taken to cut red tape in the public sector procurement process and to end the practice of bundling schemes into large contracts which they are ineligible to apply for.

Welsh Conservatives are calling on the Assembly Government to do everything it can to help SMEs like these through the recession.

Mr Millar said: "The recession is really taking it's toll in North Wales and it doesn't help that so many local firms are disadvantaged when it comes to taking on public sector contracts.

"It makes no sense that building contracts are being bundled together and awarded to large national firms when better value for taxpayers can often be achieved by breaking schemes down and allowing smaller local companies the opportunity to bid for the work.

"This is not about protectionism, what we need is fair play in the procurement process to increase competition and help public money go further during the recession.

"The six construction firms represented yesterday employ around 500 people and sub-contract 2,500 local people between them.

"They need less talk and more action from the Assembly Government if they are to beat the economic downturn."

Commenting on behalf of the 6 firms in the meeting, Chris Wynne, MD of Wynne Construction said:

"The bottom line is we don't want to have to lay off any more staff and we want our companies to make it through the recession.

"But we need a fair crack of the whip when it comes to bidding for contracts.

"The application process for public sector building contracts must be simplified. At the moment we are drowning in a sea of paper and duplicating information each time we bid for work - spending cash we can ill afford in the current economic climate.

"Streamlining the procurement process and breaking down contracts will give construction companies like ours the opportunity to compete with larger national firms that currently have an unfair advantage when it comes to getting public sector business.

"We need a level playing field if we are to get through the economic downturn and I trust that the Minister will move swiftly to address our concerns."