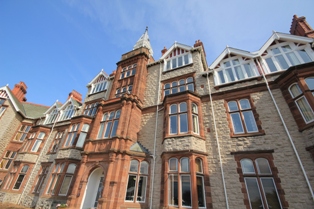 Wynne Construction is delighted to join the Blind Veterans UK (formerly St Dunstan's) charity for the official opening of the new Llandudno Centre.

The £12m refurbishment and new build project, at the site of the former North Wales Medical Centre in Llandudno, will provide 40 bedrooms as well as high quality rehabilitation, training and nursing facilities, for blind and visually impaired ex-Service men and women.

With proven experience of working within the conservation and restoration sector having previously worked on projects such as Bodelwyddan Castle as well as a number of local municipal building and churches, Wynne Construction has been able to deliver the completed project to a high standard and on time, taking 12 months from start to finish.

The work to the Grade II listed building included a number specific considerations, such as restoring the masonry and stone work back to its former pristine condition, whereas for the new build Poppy Wing extension, it was vital to ensure that the environmental and ecology impacts were adhered to. The whole building project has been carefully designed to be perfectly suited to the needs of its end users. A major part of the work involved improving access - such as widening corridors and the installation of a new lift, as well as incorporating rails with tactile signals to help with orientation. The Poppy Wing extension features sandstone and limestone cladding to echo that of the existing building and is situated discretely at an angle to the existing 1902 building to ensure that the Grade II listed building remains the prominent feature of the Llandudno centre.

As a local contractor and one of the leading construction companies in North Wales, Wynne Construction was able to offer local employment to a number of skilled workers and sub-contractors. A total of 60 sub-contractors were involved with 65 % based within a 25 mile radius of the site. Local products were also sourced wherever possible, for example, more than 16,000 Heather Blue Welsh slate tiles from the Penrhyn Quarry in Bethesda were used for the roof on the Poppy Wing extension.

Chris Wynne, Managing Director of Wynne Construction said, "As an established firm in North Wales we are delighted to have been involved in this prestigious contract. The success of the project is a reflection of the hard work from the Wynne Construction team and of our strong collaborative - working relationship with the both the consultants and Blind Veterans UK (St Dunstan's). The building is a landmark property within Llandudno and to have been involved in the restoration has been very satisfying for all the team involved." Click here for more information about "Blind Veterans UK, Llandudno Centre"