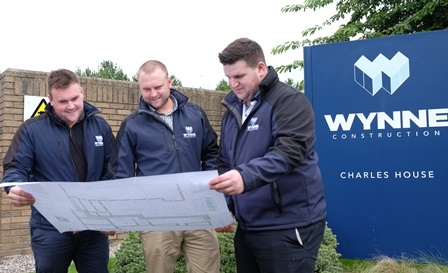 Mark Wilson and Andy Lea joined Wynne Construction as school leavers more than ten years ago. Now, along with new arrival, Dan Winterbottom, they have been appointed to run their own project sites for the company.

Mark, 29, took up the opportunity for a joinery work experience placement as a Year 10 pupil at Eirias High School, Colwyn Bay. He was then successful in securing his joinery apprenticeship with the company and completed his three-year course through Llandrillo College along with gaining site experience.

After completing his apprenticeship, he took up the role of assistant site manager at the Ysgol y Bont project in Llangefni, followed by a temporary role as site manager for the Welsh National Sailing Academy project in Pwllheli. This role involved co-ordinating seven-day week working in order to complete the job on time.

Mark is now a permanent site manager, working on the Ysgol Gwenfro Primary School project in Wrexham. He said: "I was a good joiner but I knew I wanted to get into management. I enjoy working for Wynne Construction as they look after their employees and believe in staff development."

Andy Lea, 27, joined the company as an apprentice joiner in 2005. He said: "My head of year at Ysgol Bryn Elian, Old Colwyn, told me about the joinery apprenticeships so I applied and was lucky to get one."

After qualifying in NVQ level 3 in carpentry and joinery, Andy worked on the "tools" before being offered site management experience. He said: "I was offered promotion to site manager five years ago, but felt I wasn't ready for it. Now I've got more experience and am enjoying the new challenge." Andy is managing the construction of the £12m Ysgol Arbennig Meirion-Dwyfor in Penrhyndeudraeth.

New recruit Dan Winterbottom joined Wynne Construction in May 2016. After leaving Ysgol Bodedern in Anglesey he worked in a variety of roles before deciding to study engineering. He found an opening as apprentice mechanical engineer before switching to civil engineering. He qualified in 2013 and gained experience with a construction company as a site engineer. With ongoing professional development, he hopes to continue to improve.

He is due to site manage the new Ysgol Glancegin project in Maesgeirchen, Bangor. Dan said: "I'm enjoying my new role and have received further training since joining the company. I'm looking forward to the new challenges ahead."

Managing director Chris Wynne, whose late grandfather, Charles, founded the company in 1926, said: "We are currently very busy having secured new projects through the North Wales Framework for Schools and Public Buildings and needed to expand our site management staff. Mark, Andy and Dan are three excellent new site managers who have brought lots of experience and will complement the existing team."