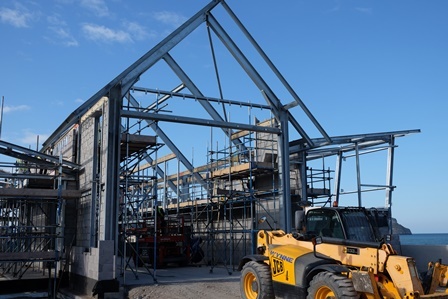 With foundations and groundworks now complete the construction of Llandudno's new RNLI boathouse is quickly taking shape at the popular seaside town.

Residents and visitors cannot fail to see the construction of the charity's new £2.6M lifeboat station on Llandudno's seafront. With the foundations, groundworks and steel frame now in place, the shell of the new boathouse will be constructed over the coming weeks in preparation for the harsh winter months.

"As you can imagine this is a really exciting time for all involved at Llandudno RNLI. The Wynne Construction team have been working tirelessly since April when they started work on the Craig y Don site. Now that the foundations are complete the shell of the boathouse is quickly taking shape - we can all see the next chapter in the station's long history developing before our eyes."

Chris Wynne, Managing Director of Wynne Construction, who is responsible for the new build said: "We are very pleased with the current progress and we are now entering the roofing phase. With the winter weather approaching and with wind being a major concern, we are conscious of the challenges ahead, but confident that we will meet the construction phase deadlines."

Pictures were released last week of the station's new Shannon class all-weather lifeboat, which is currently being built at the charity's All-weather Lifeboat Centre in Poole. The new lifeboat expected to be put through its paces on official sea trials later this year, ahead of taking its new place on the North Wales coast in 2017. The new lifeboat will replace the station's existing Mersey class lifeboat Andy Pearce, which is reaching the end of her operational life.

The current Lloyd Street boathouse in a busy town centre is not fit for purpose, in either the facilities it offers our volunteer crew or its location. Neither is it large enough to house the new lifeboat.