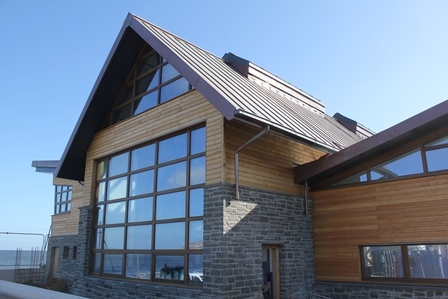 The steel-framed, timber-clad, boathouse has been constructed at Craig-y-Don on the North Shore of the resort. Wynne started construction on the £2.6m contract in April 2016.

The early stages of the scheme required a new concrete sea wall to be constructed with rock armour quarried locally at Llanddulas, placed in front to protect the building. The steel framed building has been infilled with limestone stonework, on the lower section, while the upper section has been clad in Siberian larch, which is known for its capacity to repel water.

Wynne Construction contracts manager, Steve Davies, said: "We are into the final stages of the contract. Outside, we're carrying out paving works, which include concrete hardstandings and block paving. Internally, the flooring and decorations are now being completed. We're looking to hand over the building to the RNLI at the end of June."

The new station will replace the current Lloyd Street boathouse, located inland in the busy town centre, and which is too small for a new, modern lifeboat due to be delivered to the station later this year.

The new boathouse is big enough to accommodate the 25-knot Shannon-class all-weather lifeboat and a D-class inshore lifeboat, together with their launching equipment.

The town's existing Mersey class lifeboat is reaching the end of her operational life. The £2.2m lifeboat is the first modern all-weather lifeboat to be propelled by waterjets instead of traditional propellers, making her the most agile and manoeuvrable all-weather lifeboat yet. It will be nearly 50 per cent faster, enabling crews to reach and assist casualties faster when time is of the essence.