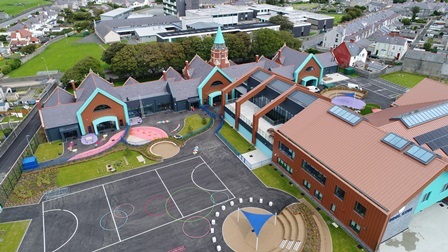 A new milestone passed for Wynne Construction when no fewer than three new primary schools built by the company opened within the same week.

In Bangor, the £5m Ysgol Glancegin in Maesgeirchen, is now home to 230 pupils, who are enjoying modern facilities built on the site of the old school. The design and build contract completed by Wynne Construction included demolition of the old school building. Wynne is now working on extensive external landscaping, as well as an outside educational area, both of which are due for completion in November.

The third in the trio of openings was the £9m Parc Cybi 'super-school' in Holyhead. A total of 540 pupils plus 70 nursery pupils relocated to it from the former Ysgol Llaingoch, Ysgol y Parc and Ysgol Parchedig Thomas Elis.

Wynne Construction used cutting edge technology to reduce waste and save time, during the construction of this design and build project. The scheme included a new two-storey structure as well as the refurbishment of an existing Grade II listed building, that housed the former Old Cybi school.

Wynne Construction managing director, Chris Wynne, said: "To see no fewer than three new schools that we have built open within days of each other is a significant milestone for the company. It was rewarding for us to hear the positive comments from children, parents and staff as we introduced them to their new facilities as work was nearing completion. We hope they will all enjoy working in their high-tech and modern environments."

"We used local suppliers and local labour where possible, to spread the benefits of the investments as widely as possible in local communities."