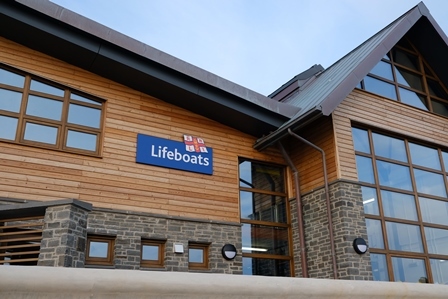 The iconic new Llandudno lifeboat station, built by Wynne Construction, has been officially opened. The imposing steel-framed, timber-clad boathouse has already become a landmark at Craig-y-Don on the resort's North Shore.

The long-awaited boathouse was opened by former RNLI director of operations Michael Vlasto and Jenny Evans, wife of the late Ray Evans, who campaigned for many years to help secure planning. The service also named the all-weather Shannon class lifeboat William F Yates and D-class lifeboat Dr Barbara Saunderson. Guests had been welcomed by the station chairman and long-time fundraiser Dr JJ Green.

Captain Marcus Elliott, Llandudno volunteer Lifeboat Operations Manager said: "This was a chance for RNLI volunteers to thank those whose generous donations have funded the lifeboats which will be saving lives on the coast for years to come. This is an exciting new chapter for Llandudno lifeboat crew and supporters."

Operational training for the crew is now taking place, before the boathouse opens its doors to the public later in November.

Chris Wynne said: "We were delighted to have worked with the RNLI on this prestigious building. As a North Wales-based contractor, it has been a pleasure to deliver such an iconic landmark on our doorstep along with supporting the local economy in the use of materials and workforce."