Cutting the turf for the new Ysgol Llanfair Dyffryn Clwyd 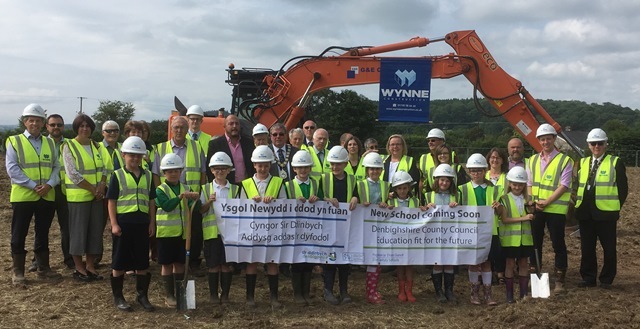 A turf cutting ceremony has marked the first stage of the building of a brand new replacement school for Ysgol Llanfair Dyffryn Clwyd. Wynne Construction is the main contractor appointed to carry out the works

The new bilingual church school will be built on land opposite Bryn y Clwyd, Llanfair using funding from the Welsh Government’s 21st Century Schools and Education programme, in partnership with investment from Denbighshire County Council.

The project forms part of more than £90million of investment in Denbighshire’s schools within the wider 21st Century Schools programme funded by Denbighshire County Council and the Welsh Government.

Councillor Huw Hilditch-Roberts, Cabinet Lead Member for Education, Children, Young People and the Welsh Language, said: "This is an extremely momentous day in the history of Ysgol Llanfair Dyffryn Clwyd.

"We have recognised that the current facilities are dated and are in desperate need of modernisation. There has also been concerns about the lack of car parking, staff areas, public areas and accessibility to the school, which is located on the busy A525 in the centre of the village. That is why the Council, working in partnership with Welsh Government, has invested significantly in this project and we are delighted to see work get underway.

"This heralds a new era for generation of pupils at Llanfair Dyffryn Clwyd and we look forward to seeing first class facilities being developed on the site over the coming months".

Rosalind Williams, Director of Education and Lifelong Learning for the Diocese of St Asaph said: "We are delighted that the new Church School in Ysgol Llanfair DC has reached the next crucial milestone within the project. We are looking forward to working in partnership with Denbighshire County Council and Wynne Construction to provide a new bilingual church school in the Ruthin area."