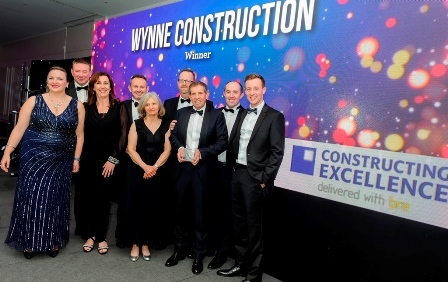 Wynne Construction is celebrating after being named one of the best in the UK construction industry. We won the SME of the Year 2018 Award (up to 250 employees) at the Constructing Excellence (CE) National awards, which recognise leading businesses, projects, and individuals in the sector.

And the major award win followed the company's success at the Constructing Excellence in Wales (CEW) awards, where it was crowned SME (1-50 employees) of the year. The Welsh win earned Wynne Construction a place on CE’s national awards shortlist, where it beat off competition from nine other SMEs across England and Wales to claim the top accolade.

It comes after a strong 12 months for the business family firm, which has secured a contract to deliver a new Travelodge hotel in Rhyl, and completed a number of educational builds including a £10m revamp of Coleg Cambria’s Bersham Road engineering centre in Wrexham, £10m Ysgol Cybi and £5.0m Ysgol Rhyd Y Llan for Anglesey County Council and the £10m Glasdir schools projects in Ruthin for Denbighshire County Council.

It has also been recognised at the Local Authority Building Control (LABC) awards, with its £2.6m RNLI Lifeboat station build winning best small commercial project at the LABC’s All Wales 2018 awards and shortlisted runner up for the Grand Finals, held in London.

And as the only indigenous Welsh contractor to have full building information modelling (BIM) Level 2 certification, Wynne Construction is continuing to be a leader in its field, says managing director Chris Wynne.

He said: "To be named as the UK’s best SME construction company is an incredible achievement. It is an accolade which would not have been possible without the buy-in from every single one of our team here, without their support and enthusiasm it would not have been possible. We have an amazing team at Wynne Construction and when you have good people, the sky's the limit, I'm proud of every one of them.

"This award win has been incredibly well received by everyone in the Company. We have been in business for more than 90 years, and while a lot of things have changed over the years since starting up, our ambition to be at the forefront and keep developing, has remained the same.

"We have exciting plans for 2019 and winning this coveted UK construction award kick starts everything nicely."