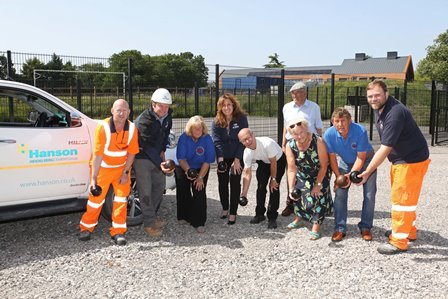 Wynne Construction who are building the new Ysgol Penyffordd primary school has stepped in to help solve parking problems at the Penyffordd & Penymynydd Community Bowling Club.

Wynne Construction donated time and resources to clear a section of land to provide extra car parking spaces for approximately 15 cars at the bowling club, which is in close proximity to the new village school.

We also responded to a plea from the community council to install the village defibrillator at the bowling club. The life-saving equipment has been bought by a bowling club member who wishes to remain anonymous, and the cabinet was paid for by the council.

Site manager Mark Wilson explained: "There have been problems due to a shortage of parking spaces close to the bowling green and the bowling club car park could only take about six vehicles. As the club were donated a new section of land, and we had groundworkers and machinery on hand, we offered to extend the car park. We excavated the site to a depth of 150mm, removed and disposed of topsoil, supplied and laid membrane, and levelled hard core donated by Hanson Cement. We also removed broken concrete posts and wire fencing to tidy up the perimeter.

"The defibrillator had been given to the village by an anonymous donor. We were happy to help to site it to give fast access in an emergency."

June Plevin-Kelly, vice chair of Penyffordd & Penymynydd Bowling Club, said: "Wynne Construction has carried out tremendous work on our bowling green car park. The increased capacity has already had a huge impact on the local community with regards to parking issues. It comes at a good time for the club after our 40th anniversary celebration earlier this month, having first opened in 1979."

Sarah Hughes, clerk to the community council, said: “Wynne Construction agreed to be on board with this community project by offering to install the cabinet, including all groundworks required for the electricity supply. Without the assistance and support from Wynne Construction this project may not have been possible.”

Jason Parry, quarry manager for Hanson Cement Padeswood, added: "After being contacted about this scheme, we were more than happy to supply material for the improved car park area. The bowling club is less than a mile and a half away from our Padeswood Cement Plant, and we at Hanson are enthusiastic about supporting local community organisations and charitable projects. It was a pleasure to work closely with Wynne Construction and the bowling club, who we wish all the best for the future, and hope that the car park will allow for greater numbers of the community to enjoy the facility for many years to come."

The new £6.9m school, which is being built alongside the existing facility on Parc Crescent, can accommodate 315 pupils with 45 nursery pupils. It will open in September. Wynne Construction has a policy of using local labour and suppliers where possible, will succeed in employing 60 per cent of the workforce for the project from within Wales and a 30-mile radius of the borderland village.

Wynne has also taken part in Coleg Cambria’s Traineeship programme, which offers hands-on experience to people about to enter the workplace.
At Penyffordd, Wynne provided work placements for two school leavers, one who has now secured permanent employment with a local contractor. It also offered work experience for a Glyndwr University undergraduate, who is now employed by Wynne Construction and training to be an assistant site manager.

The new school has been part funded by the Welsh Government through the 21st Century Schools Programme. It will enable the amalgamation of all-through 3-11 English medium community primary school on one site. It will also boast extra staff and visitor car parking, and a dedicated drop-off zone for parents and carers.