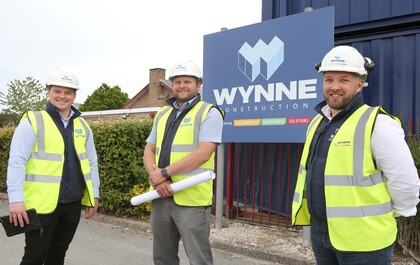 Wynne Construction has expanded its workforce with talent and experience as it prepares to embark on an influx of new projects over the next two years.

We have welcomed 10 new staff members alongside a series of internal staff promotions as the company continues to win new contracts across Wales.

The firm, which will safeguard approximately 6,500 Welsh-based construction jobs over the next two years through its £85m order book, has £25m worth of schemes currently in progress and is due to start eight new major projects across Wales and the north west of England between now and the end of 2023.

One of the new members of the team who has been involved with former projects by Wynne Construction, is design manager Richard Beatson, who joined from architectural practice Ainsley Gommon. As a senior architectural technologist, Richard was previously involved with the designs for successful Wynne projects, such as Coleg Cambria’s Deeside Sixth Form college and Ysgol Llanfair Dyffryn Clwyd in Ruthin.

Richard said: “Having spent the last seven years working alongside the Wynne team, it has been enjoyable moving across to the new position, which will allow me to grow in my own career and further develop my own skill sets. I was interested in moving into the management side of things and pursue new challenges in the construction industry, and Wynne seemed like a natural fit. Their extensive work developing schools and buildings which help improve local communities is an area I am passionate about.”

Assistant site manager Dyfed Edwards also had previous connections to Wynne prior to joining in April this year. Dyfed took part in a five-day work experience placement on the Ty Pawb arts centre project in 2017 while studying his BTEC L3 construction management qualification at Coleg Cambria.

He said: “After I left college, I was always keeping an eye out for openings in site management at Wynne and it’s been great to finally achieve that move. From my work experience, it was clear that the company was one which was willing to help their staff grow and develop and that has been something I had always been looking to find in a company.”

Site manager Liam Jones, who is working on a development of Ysgol Brynffordd as part of Wynne’s £7.1m package of works to expand pre-school provisions within Flintshire, is another new member of the Wynne Construction team, having previously operated a joinery company alongside his father for 12 years before moving into a position at a timber framing company in Ruthin.

Liam said: “I always kept my eye on Wynne as it has developed a reputation of a company that was good to work for with high-quality projects. Many of those natural challenges in getting used to a new company have been completely washed away by how helpful and welcoming the senior members of the team are.”

In addition, Wynne has also rewarded team members with internal promotions, including one for assistant site manager John Watts, who moved into the position after previously working as a qualified joiner.

John said: “I have been with Wynne for the last four years after occasionally subcontracting for them since 2013, but the company has offered me a great work culture and methods of progression which really has let me further develop my own skills. Progressing up to an assistant site manager has really allowed me to take on a whole new skillset in the management aspect of things which I am really enjoying.

“It has also been incredibly useful for my development to have team members I can regularly turn to for advice.”

Managing director of Wynne Construction Chris Wynne said: “Upskilling and career development has long been one of our key priorities through the Wynne Futures Foundation, so it is encouraging to see these values being realised; those moving into new positions being recognised for showing that drive to develop even further.

“We’re thrilled to strengthen our workforce with new talented individuals who share our passion for delivering industry-leading construction projects to our clients.”