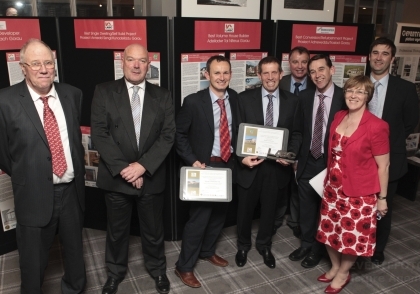 Wynne Construction is celebrating success after being presented with four awards by the Local Authority Building Control at the Building Excellence Awards 2012 at a ceremony held on Friday 27th April at the St David's Park Hotel.

Parc Eirias in Colwyn Bay, the new £6.5m indoor sports centre won both the Conwy County and the North Wales award for Best Commercial Development. Coleg Meirion-Dwyfor's new £8m Pentref Addysg @ Glynllifon, near Caernarfon (which is part of Grŵp Llandrillo Menai), won both the Gwynedd County and the North Wales award for Best Educational Building. Both projects will now go forward to the All Wales selection committee to compete against projects in the South Wales region. An awards ceremony for the All Wales winners will be held in Cardiff later in the year.

The LABC Building Excellence Awards acknowledge the essence of good buildings. Focusing on the excellence shown from a construction and technical building control point of view, the awards showcase buildings and design teams that have had to contend with technical issues and difficult sites, and provide innovative and creative solutions.

Kath Coughlin, Executive Director at Grŵp Llandrillo Menai, commenting on the Glynllifon Campus award, said: "This has been a very exciting project for the College and is the largest new-build development we have undertaken in recent years. We have had a good working relationship both with Wynne Construction and our consultants Capita Symonds and this is reflected in the quality and standard of the building, which was completed within budget and on time."

Paul Terry, Director, Capita Symonds said: "We are delighted that the Wynne Construction team received the LABC Award for Best Educational Building for their delivery of the new Teaching Block at Glynllifon Campus. As designers we are very proud of the building and pleased that it works well for the College. It has been a great project with everyone working well and flexibly together. All credit to Wynne Construction for their can do approach and the standard and quality of the workmanship."

Celebrating the awards, Chris Wynne commented: "I am absolutely delighted that Wynne Construction has received these awards and believe it is a very fitting tribute to the commitment and hard work of all the team. The success of the projects is a reflection of our strong collaborative working relationship with both Conwy County Borough Council and Coleg Llandrillo Cymru and all the consultants involved in the projects."