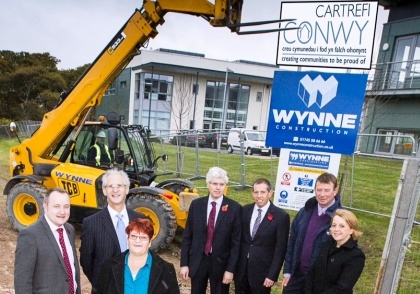 Wynne Construction has started work on a housing association's new headquarters that will harness solar power to generate 75 per cent of its own electricity. Cartrefi Conwy will be bringing more than 100 jobs to their eco-friendly base on North Wales Business Park on the outskirts of Abergele. The move has been hailed as a major boost for the local economy when it's up and running next summer.

The contract to build the new state-of-the-art premises was won by the award winning firm, Wynne Construction, against stiff competition from across the UK. The sod cutting ceremony was a double celebration because Cartrefi Conwy are closing in on achieving their goal of bringing all their properties up to the Welsh Housing Quality Standard by the end of the year.

Clwyd West AM Darren Millar said: "This is a fantastic day for Abergele. We're talking about a prestigious building coming to the town on a prestigious site. More than 100 people are going to be employed here so it's going to have a huge economic benefit for the town. Cartrefi Conwy are really coming on in leaps and bounds as an organisation with the leadership of their Chief Executive, Andrew Bowden. They're having a big impact across the whole of my constituency - wherever people are living in Cartrefi Conwy homes they can be assured they're living in a high quality home and they're being looked after by their landlords so that makes me doubly pleased. I'm delighted that Cartrefi Conwy was one of the first organisations out of the starting block in delivering the Welsh Housing Quality Standard. I've seen what the houses have been like before they received investment, and then afterwards and they've been completely transformed - it really is having a huge impact on the quality of life of their tenants."

Andrew Bowden, the Chief Executive of Cartrefi Conwy, said: "This is something we have been building up to for the past three or four years. We wanted to make sure we were delivering on our promises, the most important being to make the housing improvement to achieve the Welsh Housing Quality Standard which we will do by the end of December.

It gives us the platform to move forward and develop our new HQ which will bring all our services together into one building, giving our colleagues, our staff, the best facilities they can have to deliver the best customer services to our customers in the county of Conwy. We will have accommodation that will provide for up to 120 staff. It will have a community hub area that will allow organisations from around the county to use this facility for mini conferences or meetings. I am so pleased that a local firm, Wynne Construction, won this contract against national competition. I believe they can deliver the quality and the performance we need, but also linking in to creating local employment, local jobs, supporting apprenticeships and traineeships which is a key part of this development."

Chris Wynne, Managing Director of Wynne Construction, based in Bodelwyddan, was "extremely proud" to have won the contract. He said: "The new Cartrefi Conwy headquarters will be one of the greenest buildings in North Wales. It will have insulated panelling and solar panels which will generate 75 per cent of the energy and hot water.

We believe it is fitting this prestigious project to provide a new headquarters, from where Cartrefi Conwy will serve their communities across Conwy, has been awarded to a local North Wales company. As a result, local people and local suppliers are engaged in this project and more importantly it will help us sustain long-term local employment, something that is vital for the local economy."

According to Pam Lonie, the Chair of the Cartrefi Conwy board, the new HQ will "bring new life to Abergele". She added: "In another month's time we will have met our target in meeting the Welsh Housing Quality Standard and starting work on the new headquarters shows that our executive team has well and truly delivered."

Steve West, the Managing Director of North Wales Business Park, said: "We're delighted to have a tenant of Cartrefi Conwy's quality coming to the site. The fact that they've designed a bespoke, purpose-built headquarters is a fantastic vote of confidence in North Wales and the business park. We have a stunning location with Gwrych Castle behind us, views out to sea and the golf course nearby as well as being two minutes from the A55 and the facilities of Abergele town centre two minutes in the opposite direction. Cartrefi Conwy are bringing more than 100 jobs and we already have around 200 working here so it's great for the local economy."