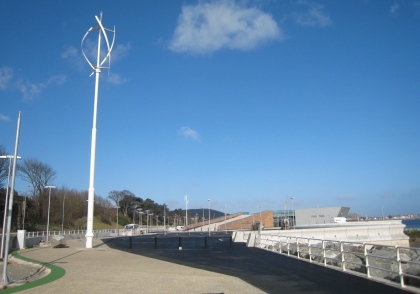 The new watersports centre at Colwyn Bay has been completed and was launched in Colwyn Bay with a weekend of celebrations.

This weekend included the official opening of a beach which has had half a million tonnes of sand pumped ashore through a pipeline, partly to prevent flooding.

First Minister Carwyn Jones said the new Porth Eirias centre was set to be a major attraction for North Wales.

The watersports centre is part of a multimillion-pound bid to redevelop the town's seafront. The beach used to have more sand, but it has been washed away over recent decades. The sand helps sea defences by reducing the impact of the waves on the promenade.

The work is also intended to protect the railway and A55 from flooding, as well as help the local economy.

The opening is being marked by a free two-day Prom Xtra festival along two miles of Colwyn Bay promenade.

The whole complex will be officially opened later in the year, but is already being hailed as a vital new development for the town.

Mr Jones said: "I would like to wish Porth Eirias the best of luck as it opens its doors this weekend. It is set to be a major attraction along the north Wales coast and will benefit both the town and wider area." Click here for more information about "Completion of Watersports Centre at Porth Eirias"