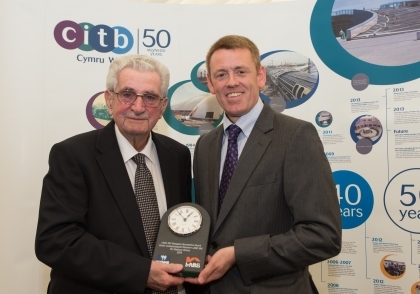 During the CITB Cymru 50th Anniversary celebrations on 18 July 2014 our Chairman Maldwyn Wynne was presented with an LABC Lifetime Achievement Award.

The award had been originally scheduled to be presented to Maldwyn on 11 April at the LABC award ceremony at St David's Park in Ewloe. However, due to unfortunate circumstances, Maldwyn was unable to attend on that day.

The CITB kindly invited Maldwyn and other members of the family to their 50th anniversary celebrations at the Parc Eirias multi-purpose indoor sports centre, which, coincidentally, the Company had built for Conwy Borough Council in 2011.

Mark Bodger, the newly appointed Director of Strategic Partnerships for CITB Cymru made the presentation to Maldwyn. The Lifetime Achievement award was given in recognition of Maldwyn's services to the construction industry over the past 70 years.

Maldwyn was 16 when he started working for his father, the late Charles Wynne, founder of C Wynne & Sons Ltd. At the time the Company undertook a range of contracting works for both private and public clients, constructing schools, houses and farm buildings and putting in sewers in some of the more rural villages in the area.

Working on site, Maldwyn soon learned all the main building trades including brickwork, joinery and plumbing. In those early days, construction was very different to today: In the absence of machines and power tools, much of the work had to be carried out by hand: Trenches had to be dug using spades, and with no forklifts or telehandling machines, all materials had to be carried by the workers or moved around site in wheelbarrows. Work was kept fairly local (within a 15-20 mile radius) with some of the men even cycling to and from site. There was no PPE, no on-site facilities and no telephones. Ordering materials had to be done by way of a list prepared on site and taken to the office each night. The materials would then be taken back to site in the following days. How different to today with mobile phones and the internet, making communication and material ordering so much easier, not to mention all the machinery and power tools which are now so indispensable in the construction industry.

The Company continued to carry out construction works predominantly for the public sector and involving houses and schools, (including the first open plan junior school in Abergele), but also a number of smaller speculative developments for the private sector. In 1959 Maldwyn became a director of the Company, continuing to play a very active role on-site, until increasing legislation and paperwork compelled him into the office, which was originally located in Rhuddlan.

As MD, he worked tirelessly for the betterment of the construction industry through his involvement in the CMPE and Building Federation. Encouraging and supporting apprenticeships, he was probably one of the first from North Wales to visit the new training facilities at Bircham Newton.

Having guided the Company through many challenging times (recalling for example, the Building Strike of 1972 as well as several recessions), he has steadfastly provided long-term employment to many local people, some of whom have progressed from apprenticeships to managerial positions.

With today's construction industry barely recognisable from what it used to be, Maldwyn still comes into the office on a part-time basis, A master of typing with two fingers, he also uses a computer. During power cuts however, he is the only one who is able to carry on working thanks to his faithful old type-writer!

After 70 years in the construction industry and at the age of 86 Maldwyn can be forgiven for occasionally nodding off in front of his computer!